A new open corn variety Bioleft is being developed, generated from the exchanges and synergies of two producer-breeders of our network.

Enrico Cresta and Milton Vélez are growers from the Río Cuarto area in the province of Córdoba. Cresta manages 400 hectares that for 26 years have been dedicated to the rotation between livestock breeding and organic production of corn and wheat; Vélez manages some 300 hectares where wheat and corn are produced in a conventional way, although exploring variants in the value chain: advances towards the production of seeds and grains, which he calls “steps to the side”.

Last January, they participated in the first collaborative corn breeding workshop organized by Bioleft at INTA Pergamino. There they met and began to form part of a network of corn producers that generated connections and exchanges of knowledge throughout the year, through whatsapp. And on Thursday, November 17, Milton visited Enrico’s field in what they called “an agricultural-cultural meeting”: they visited the cornfield together, shared experiences and techniques around corn production and finally exchanged seeds and food derived from them. In this way, in an artisanal way and on a human scale, one of Bioleft’s objectives is being achieved: to support networks of producers to recover their autonomy in relation to the seeds they work with through peer-to-peer collaboration. 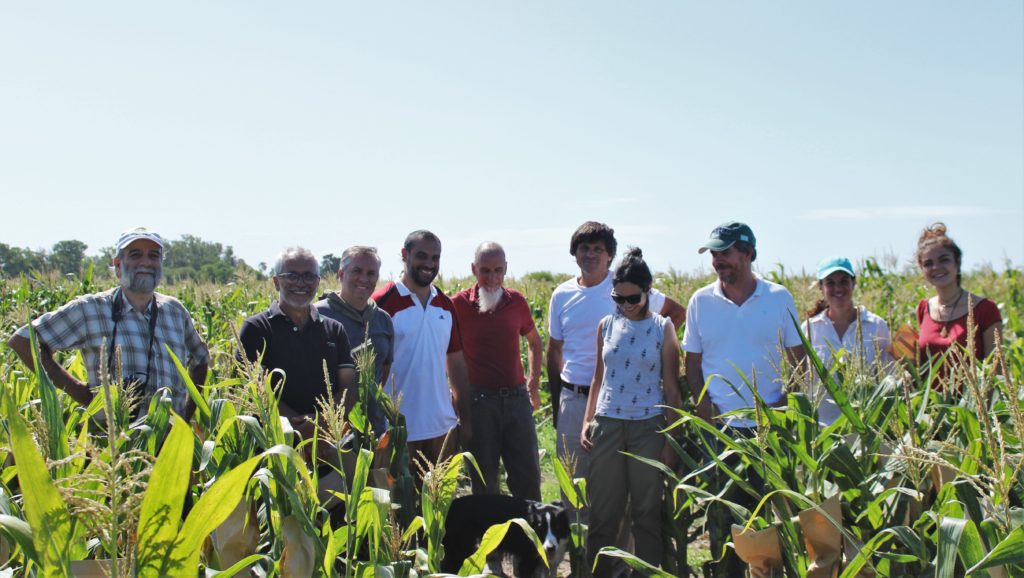 “It was a meeting of two human beings culturally linked to agriculture, which does not exist in nature by itself,” said Milton Vélez. “The meeting point was corn, but we had a dialogue about agriculture. There were exchanges of opinions, knowledge, seeds and food, because the processed food derived from a crop is part of agriculture, as is the act of cooking. We exchanged polenta, flour, corn seeds and seeds of some other species as well. It was a nice meeting.

During the visit, Cresta, the host, showed Vélez the corn trial he conducted with materials from INTA Pergamino based on the work with Bioleft. They talked about the different techniques and strategies they put into practice when growing corn; Cresta showed his weed control techniques, among other knowledge. And through the exchange of seeds they started a collaborative breeding process: Cresta will cross one of its varieties with those provided by Vélez, in order to find one with better conditions. “Milton has been working his varieties longer than me; in terms of yield and stability they have them more evolved,” Cresta explains.

“From the Bioleft initiative and the collaborative breeding project we started to share experiences, and this is the first time we exchange materials, focused on corn seeds. The work space is around the seed,” Cresta said. “The usual thing in the field is that the producer buys the seed at the seed store; it is an input, he goes and buys it and that’s the end of the story, and delegates all the breeding work to the seed dealers and breeding institutes. On the other hand, when a producer, in this case Milton and I, makes the decision to improve his seeds, he also has the spontaneous need to contact other producers. Breeding becomes collaborative because of the need to share knowledge, results, techniques, strategies, and this is a key issue to rebuild the agricultural-cultural community,” he said.

From the field to the table: integral criteria

“In this way, having the production of seeds in our hands, we also have the production of food, we have contact with those who produce and consume it; we can have a feedback. Then, based on the uses, tastes and cultures, we also develop seeds that are more adapted to that type of use and not only to a yield or ‘quality’ issue,” Cresta emphasizes. “That is something that the peasant community did habitually; the evaluation of seeds, for thousands of years, was like that: totally linked flavor, gastronomy, culture, and health, with yields. That is why we say that seed is an agronomic and cultural fact”.

Vélez also stresses the importance of thinking about agriculture in an integral way. “I manage about 300 hectares in which corn, soybeans and a little wheat are grown. I come from a conventional production in which, unlike my peers, I took a step within the value chain towards the production of seeds for my own use and towards the processing of cereal grains, both corn and wheat: I am processing flours, polenta. And having taken this step led me to perceive that in order to generate my own livelihood I need less agricultural land, less land. This is a very interesting concept, because the social, political and economic approach talks about scale production, that what is not scale is useless. But this allows me to see another way: that if you take steps towards one side or the other of the chain, you do not need scale to generate your livelihood. A little goes a long way.